The information below refers to a Panerai 112 Historic Luminor base manual wind sandwich dial.
With Panerai watches you can find information such as the serial number and the year designator on the case back. Not all case backs are the same, such as display backs, so the numbers will be in different locations.

Case Number.
This number varies from watch to watch and is often duplicated but seems to indicate a particular style of case.

Serial Number.
The serial number of the watch, and increments with production. The newer the watch, the higher the number.

Year Designator.
Panerai watches are dated by a letter that appears before the production number. The watch shown in the example below is a ‘G’ production year. which is approximately 2004. The “1099/1200” means number 1099 of 1200 pieces in the G series. 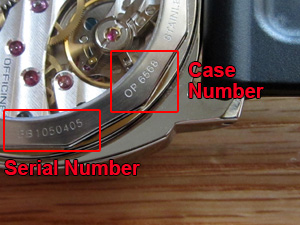 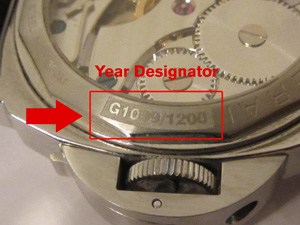 The following are the approximate years of production that the letters indicate: